In a text exchange with psychiatrist Keith Ablow, Hunter Biden slammed Texas Democrat Beto O’Rourke as being a “failed politician” with a pretentious name.

On Monday, Democrat Robert “Beto” O’Rourke, most well known for bragging he would take the guns of law-abiding Americans if he ever was President, announced his candidacy for the Governor of Texas.

“[Texans] were abandoned by those who were elected to serve and look out for them,” O’Rourke said in his announcement video, referencing the power failure in the state in February. “It’s a symptom of a much larger problem that we have in Texas right now. Those in positions of public trust have stopped listening to, serving and paying attention to and trusting the people of Texas.”

Together, we can push past the small and divisive politics that we see in Texas today — and get back to the big, bold vision that used to define Texas. A Texas big enough for all of us.

However, despite his vocal support in the media, support for O’Rourke and his political ambitions may be far from universal within the power structure of the Democrat Party.

National File can reveal that Hunter Biden, the surviving son of Joe Biden, does not think much about “Beto.” In text messages from January 2 2019, exchanged with former psychiatrist Keith Ablow, Hunter claimed that “Beta” was chosen by “Chicago fakes who think there [sic] gods gift to politics.”

“Do you think the plucked him from obscurity because he has such a pretensions f*cking name. It sounds familiar,” Hunter asked Ablow, who agreed, saying that Beto has a “terrible name.” Hunter went on to describe O’Rourke as a “failed politician who had no record of achievement in government.” At the time, the Texan was most well known for failing to defeat Ted Cruz in the previous year’s Senate race, despite raising a record $80 million, the most for a Senate candidate ever.

Ablow agreed, saying that if he was nominated as the Democrat candidate for President, “it will be an utter disaster,” saying that older Biden was “the only plausible answer,” which led into a conversation between Hunter and Ablow where the two seemingly acknowledged that Joe Biden was suffering from dementia. 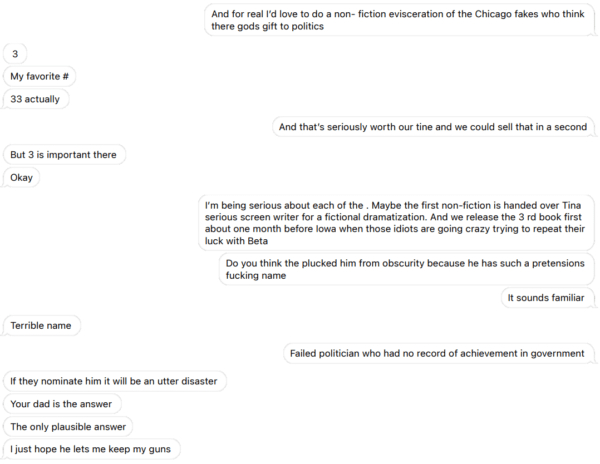 Ablow later lost his license to practice medicine in May of 2019 after it was claimed he allegedly used his position as a psychiatrist to manipulate female patients. According to the New York Times‘ reporting in 2019, “Dr. Ablow’s license was suspended in Massachusetts after an investigation determined that his continued practice was a threat to the ‘health, safety and welfare’ of the public.” In the text messages, Ablow and Hunter discussed becoming partners for various business opportunities including a book and a podcast.

National File has over 800 pages of previously unreleased Hunter Biden text messages and intends to publish more in the coming days. National File confirmed the authenticity of the text messages using multiple methods and with assistance from the Marco Polo research group.

Fauci’s Daughter Ali Fauci Is A Software Engineer For Twitter

ABOUT US
Conservative War reports the REAL NEWS other media don't report!
Contact us: [email protected]
FOLLOW US
© © COPYRIGHT CONSERVATIVEWAR.COM. ALL RIGHTS RESERVED. © 2019 ConservativeWar.com. All Rights Reserved. All materials contained on this site are protected by United States copyright law and may not be reproduced, distributed, transmitted, displayed, published or broadcast, in whole or part, without the prior written permission of ConservativeWar.com. All rights Reserved.
MORE STORIES